Lymphedema usually occurs as a side effect of breast or uterus cancer treatments. It causes severe swelling of the arms and legs when the flow of lymph fluid is blocked as a result of radiation therapy or surgery to remove lymph nodes that filter out cancer cells.

Traditionally, a physiotherapeutic approach that utilizes compression stockings and massage has been adopted to treat this condition. Nowadays, however, a surgical procedure called lymphovenous anastomosis is becoming popular. Anastomosing a lymph vessel to a vein using this method helps to reduce swelling. Patients can relieve symptoms by wearing compression stockings after this surgery.

This groundbreaking procedure was developed by Dr. Isao Koshima. He has been pioneering state-of-the-art super-microsurgical techniques for decades.

Patients at home and abroad from as far as Saudi Arabia, Russia, the U.S. and Europe have come to Dr. Koshima to receive this surgery. In desperate hopes to alleviate their symptoms and to prevent them from worsening, many of those patients have made painstaking efforts to reach him. English research papers and Japanese articles about his work on the Internet are the only prior link they have with him.

As more and more patients turn to Dr. Koshima’s expertise, a growing number of surgeons from across the globe who are capable in microsurgery have started to learn about his techniques. These surgeons visit Dr. Koshima to be trained by him or invite him to perform live surgery sessions at international conferences, thereby spreading lymphovenous anastomosis to the world. 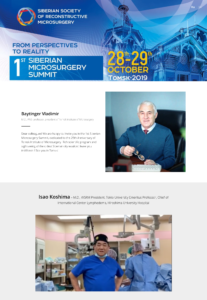 Source: The website of the Siberian Microsurgery Summit held in Tomsk, Russia in October 2019

Here are some academic conferences that Dr. Koshima took part in during the first half of 2019.

At this conference in Palm Desert, California in February 2019, Dr. Koshima gave a talk entitled “From Supermicro to Nanomicro” in front of 500 participants. He played a video of his nano microsurgery in which he successfully linked a 100-micron lymphatic vessel to a vein with the use of an 8K camera. His masterful skill to manipulate medical instruments deeply impressed the audience.

Dr. Koshima demonstrated another live surgical procedure at WSL2019 at Chang Gung Memorial Hospital in Taiwan in April 2019. The two images below were taken during the session. 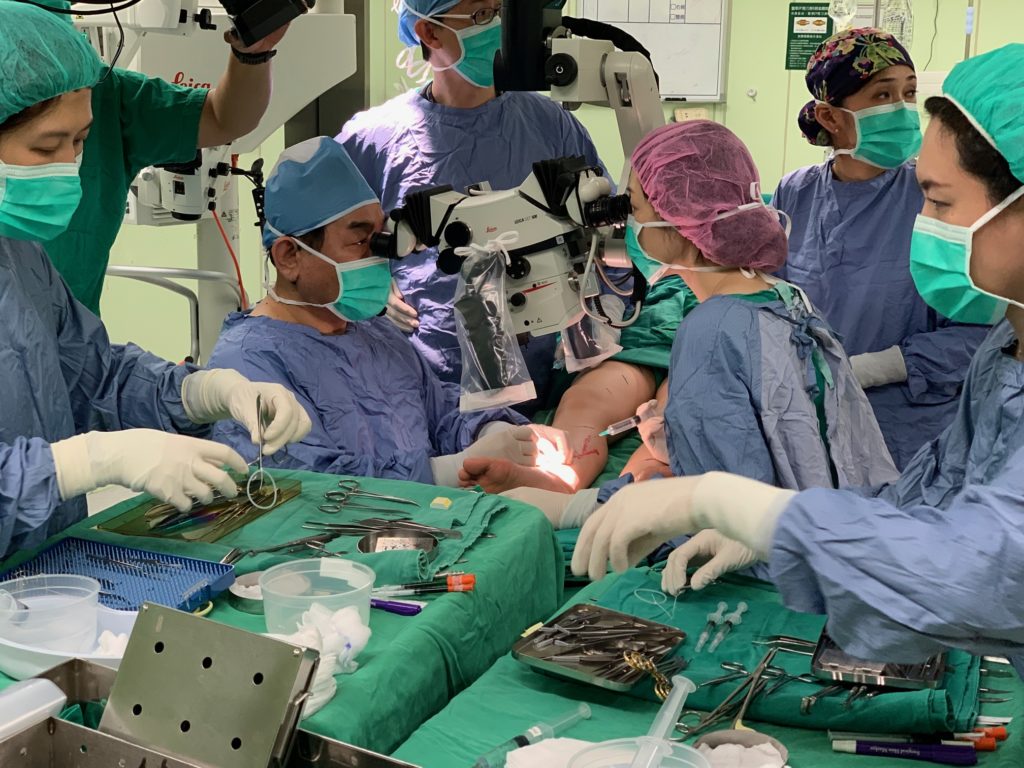 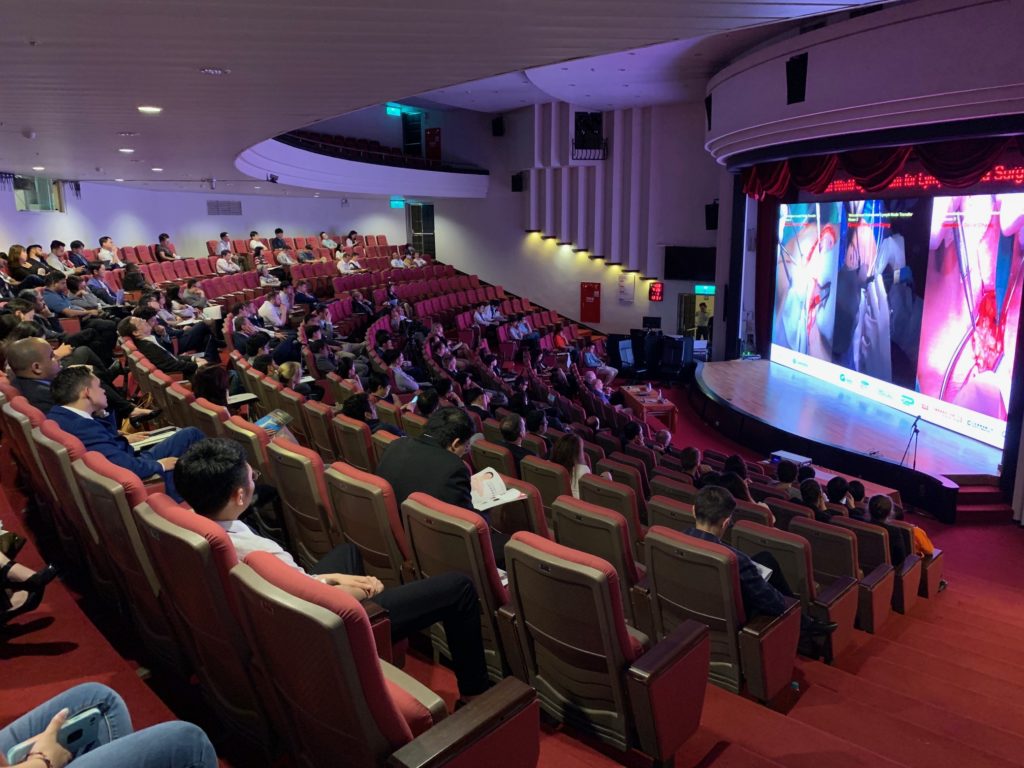 Photographs from ongoing conferences can be viewed in the photo gallery. You can take a glimpse of those events and the participating surgeons. Below is a group photo from one such academic conference.

The 2nd Annual Meeting of Chinese Association of Microsurgeons

Nearly 2,000 Chinese doctors specializing in microsurgery gathered at this meeting held in Dalian in May 2019. As a guest speaker, Dr. Koshima gave a keynote speech titled “From Supermicro to Nanomicro.” 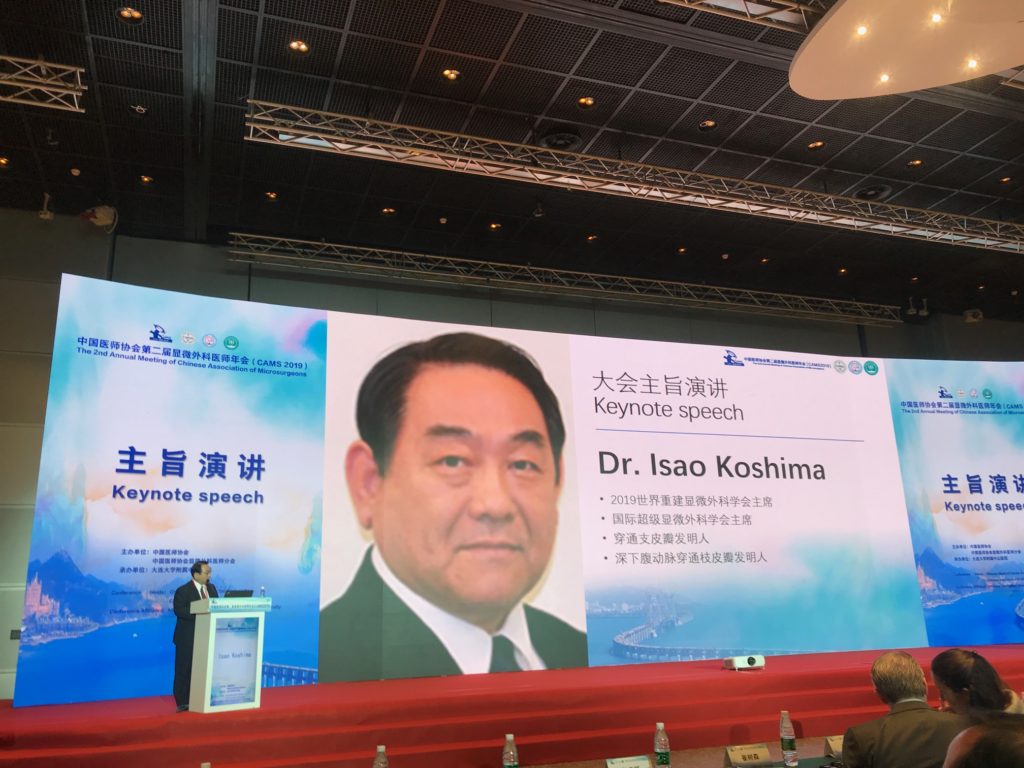 The 10th Congress of World Society for Reconstructive Microsurgery（WSRM2019）

Dr. Koshima has been serving as the president of the World Society for Reconstructive Microsurgery (WSRM). The 10th Congress, WSRM2019 was held in Bologna, Italy, where he gave a presidential lecture on “Aesthetic reconstruction with supermicrosurgery” at this congress. Many young doctors were intrigued by his talk and his new concept for surgical technique which he had developed.

Lymph-venous anastomosis developed by Dr. Koshima is expected to be introduced to practitioners of supermicrosurgery around the globe, in turn reaching as many lymphedema patients as possible.

To realize this goal, developing surgical instruments suitable for supermicro and nano microsurgeries – such as micro forceps to handle ultra-fine surgical needles and sutures – is essential. Dr. Koshima travels all over Japan and the world as a lifetime surgeon and trainer. He also takes the initiative to develop prototypes of such surgical instruments with Japanese manufacturing companies.